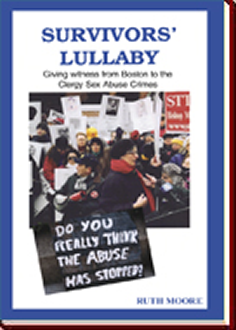 A note from Ruth Moore, one of the coordinators of STTOP and the editor of Survivors' Lullaby:

"Survivors' Lullaby is now in paperback and available on-line at Authorhouse and soon will be available at the other book stores (by special order). I would like to thank all the contributing authors for their submissions and their courage to speak the truth."

To purchase the book on-line go to authorhouse.com. Once there, click on Book Store and in the search window, type in Survivors' Lullaby.

Book summary that appears on Authorhouse:

“Survivors’ Lullaby” is a dramatic and heart wrenching compilation of personal accounts and writings by survivors of catholic clergy abuse.Survivors and their supporters voluntarily submitted their life accounts, poems, speeches and other written testimony.   The contributing authors have shared with us the details of years of suffering that they have endured because of the abuse and the subsequent cover-up of the crimes committed.  They have made it vividly clear as to why it is not possible to  “Just get over it” or to “Just move on”.Included in this book are survivor submissions from Colorado, Indiana, Canada as well as from the local Boston area.  Supporting friends have also submitted their recollections of sidewalk demonstrations that occurred in several New England locations and why they have become strong advocates for survivors.Some of the accounts in this book describe graphic details of ritual and sexual abuse and for this reason, younger readers or those who may be emotionally fragile, should not read this book.The purpose of this book is to end the decades of silence that masked this human disaster and to reveal the horrific details of crimes that have been and continue to be committed.   Susan Renehan, a survivor and vocal advocate once stated,  “We need the truth before we can heal.” Only when we know the truth, embrace our wounded and make the necessary changes to our laws, can we ensure the safety of our next generation of children and young adults.

I would like to thank all the contributing authors for their generosity in allowing us to print their powerful accounts of sexual, ritual and spiritual abuse by Catholic clergy.We applaud them for their courage to share with us their testimony of abuse and associated lifelong traumas.  Some survivors have submitted startling original poems, essays and speeches advocating for accountability, justice and safety for our next generation.The authors come from varied social, geographical and educational backgrounds.  A common thread that ties these brave individuals together is their fervent desire that no other child or young adult be exposed to the silent terror and trauma that they have had to live through.I am honored to have had this opportunity to work beside many courageous survivors, to edit this manuscript and to contribute some of my own recollections to “Survivors’ Lullaby”.  I am indebted to all survivors and our supporting friends for helping me to find a deeper meaning in life and for discovering the spiritual joy and love that we naturally have for others.

Would you believe your child, if she told you that she was held over an open hole at the local cemetery and threatened to be interred there if she revealed her secret?  Or would you believe her if she said she had been placed on the altar in the lower church and was badly hurt by a hooded man? Tragically, both of these situations are details from two separate survivor accounts included within the pages of this book.

Even today it is difficult to describe what it was like to be in on the sidewalk in front of the Cathedral of the Holy Cross, as the explosion from the sex abuse crimes rippled around the World.  Why this explosion began in , we may never know.  We do know that this crisis had been bubbling below the surface for many years.

Spontaneously, strangers, both survivors and their supporters, gathered at the Cathedral in a desperate search for answers, truth and justice.  We soon became friends and our friendships developed into several caring and loving communities.  People from around the and connected with us through the Internet and survivor conferences.

Several of our Internet friends made the trip to to meet with us personally and to take part in regional demonstrations. Joe came in from and joined the Solidarity March in , calling for Bishop McCormack’s and Bishop Christian’s resignations.  He held a large poster with his childhood picture, for the first time and proclaimed publicly that he had been sexually abused by a Catholic priest as a child.  made the trip from , and Linda and Jeanne came from to stand with us on a rainy April morning calling for Cardinal Law’s resignation. Their accounts are among those included within the following chapters.

Steve Lynch once stated that “The sidewalk in front of the Cathedral is sacred ground.”  Each Sunday this sidewalk becomes a special place to gather. During these times some of us acknowledge feeling a special energy among us.

From early on in the clergy sex abuse crisis we were concerned that a record of the turmoil and conversations that occurred on the sidewalk in front of the Holy Cross Cathedral in would be lost. We were certain that over time the Catholic Church would reshape this historical information to minimize the true extent and scope of the crimes that were committed by too many priests and their enabling bishops.

Some of us talked of writing a book, and at first, this project seemed to be a matter of collecting life accounts and other written recollections and then find a publisher.  I didn’t realize how difficult this project would be until I sat down to write my own story.  Immediately my mind flooded with 18 months worth of heart wrenching conversations with courageous survivors.  Visual snap shots of contentious encounters with clergy and laity, and hundreds of posters decrying our anguish flashed across my mind.  This picture was too big to capture with words.  No one could put their arms around it and describe accurately what had happened.  I did not comprehend how difficult it was for survivors to even begin to record their traumatic accounts.

Aided by the advice of my neighbor, Dr. Kathleen Jordan, who writes for a living and is also a survivor of clergy abuse, we slowly collected accounts, formatted e-mail entries and listed tentative chapters.  I’m indebted to my husband Charles for his computer expertise as he simplified the formatting process and organized computer files for submissions.

Kathy Dwyer, ritual and sexual abuse survivor and loving friend of many of us, actively encouraged supporters to record their recollections, insisting we were also part of the history unfolding before us.  Without her constant encouragement and wise advice, this book would not exist.

Several of the survivor accounts included within the book are shocking and difficult to read.  Some details of the sexual, ritual and childhood abuse are graphic and not intended for younger readers or for those who are sensitive and emotionally fragile.  Many of us will be unable to comprehend the phrase “ritual abuse”, understand the scope of this evil or the devastation it causes, especially when performed within the church.

The request for accounts went out mid August 2003.  Mary McNulty sent out weekly reminders counting down to the first deadline for submission.  Survivors also submitted original poems, lectures and other selected essays.  Some had already written their accounts and submitted them early.

All accounts have been voluntarily submitted for the purpose of publication within this book.  Some accounts have taken months and even years to record.  Several names have been changed in deference to other family members.

We are deeply indebted to those who have shared their record of abuse with us and applaud their courage and determination for doing so. With love we bear witness to all the survivor submissions set forth in this book and sincerely hope that those who have been so severely violated, will never feel alone, unloved or powerless again.